The parrot Franky, made famous by cyclist Scarponi, was injured in an accident. |     NEW: Dossier corona, with facts and fake news about corona. |     The De Doping Academy website will soon move to a sub-website of this site. | To find the truth, we must continue to doubt. | 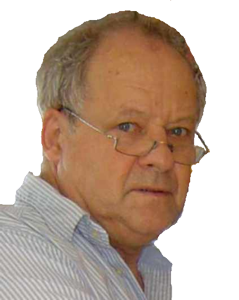 Bram Brouwer (born in 1947 in Leeuwarden as Sybrandus Jan Brouwer) has been cycling since 1964 and skating since 1966. In 1965 he became Dutch National Champion with the then Dutch Bicycle Touring Union (NRTU) and competed in 1966. In addition, he drove performance rides such as: Amsterdam-Rome-Amsterdam (5000 km). First alone, but from 1972 together with Gonnie, whom he met during skating training. They married that same year. Together they drove performance rides such as Amsterdam-Rome-Amsterdam (for Bram 2ex), the Tour de France Randonneur (4895 km; 2x), Amsterdam-North Cape (3000 km), et cetera. Under Bram's leadership, Gonnie reached the national marathon skating stop and the top of women's cycling in the 70s and 80s. Bram was particularly interested in the backgrounds of the sport and its practitioners.

In 1979 Bram obtained his diploma skating trainer (at that time still called Federal Trainer) at the Royal Dutch Skating Association(KNSB) and in 1982 he became one of the first certified cyclist trainers at the Royal Dutch Cycling Union (KNWU). Bram also obtained the strength training diplomas of the Dutch Sports Federation (NSF), Recreation Sports Leader and Sports Developer of the Dutch Sports Academy. He was a trainer at several speed skating, cycling and triathlon clubs, and speed training groups. For many years he was also the coordinator of the Elf Lakes Cycling Tour, which underwent many innovations under his leadership. The number of participants rose from 150 to more than 10.000. Bram was the course leader and lecturer of the 'Touring Bicycle Supervisor' course of the tour department of the KNWU. Since this department merged with the NRTU to the present Dutch Bicycle Touring Bicycle Union (NTFU), he is the course leader and teacher of the course 'Touring Bike Events Organizer' at this organization. In 2007 he was interim coordinator of the Eleven Cities Bicycle Four Days Marches, after the then coordinator suddenly dropped out due to illness.

In 1986 Gonnie and Bram started the 'Cycling and endurance sports school Friesland, aimed at professional guidance of endurance athletes. Personal attention, personal development and especially fun were core themes in their guidance. After Bram specialized in positioning riders on the road bike, they changed the name of their organization to 'Endurance sports Total". Because they were able to realize their advice, they went on to supply complete, custom-built, racing bikes. In addition, they provided training for groups / associations. These activities suddenly came to an end when Gonnie died suddenly in 1995 while giving training on the Kalverdijkje cycling circuit in Leewarden.

After a while Bram picked up the thread and went to study psychology at the Open University (OU). While studying work and organizational psychology, he specialized in sports psychology. Bram was part of an intervision group of enthusiastic Northern sports psychologists, who together tried to develop their field by improving the quality of their work. At the beginning of 2009 Bram obtained his bachelor's degree and in the second half of 2 he graduated cum laude as Master of Science in work and organizational psychology. His graduation research focused on doping in sports in general and cycling in particular. On October 2009, 9, Bram obtained his PhD at the OU for his thesis'The myth of the red blood cellin which he shows that there is no evidence that epo and blood doping improves endurance performance. His findings were confirmed in 2017 in an experimental study by Leiden University.

During his studies Bram was a student member of the Faculty Education Committee of the Faculty of Psychology of the Open University for four years. He is also a member of the Association of Social Psychological Researchers (ASPO) and, in addition to his studies, has qualified as a mediator and is a registered SRM mediator (Stichting Register Mediators). He mainly focuses on conflict mediation in private and work situations and sports environments. Bram has also worked as a volunteer for victim support for over a year and a half. In 2010 Bram Brouwer received his certificate of the NIP course 'Between Seniority and Seniority'. This makes him one of the few work & organizational psychologists who specializes in the problems of the parent employee (seniors).